The University of Gjakova “Fehmi Agani” (UGJFA) aims to form cadres that matches the labour market demands especially in education, health, economy, administration and other fields that will increase the region’s and Kosovo’s competitive advantage and level of education.
UGJFA will make Kosovo more competitive by using its competitive advantages as an educational centre for students of this region of Kosovo. UGJFA will lead in healthcare services and establishment of cadres for quality in education through contemporary teaching methods and will increase the cultural and artistic values of the region. It will also continuously increase the standards and develop skills and knowledge for European integration. UGJFA will promote knowledge acquisition by attracting students who are interested to study, work and research by internationally acknowledged criteria and standards that are coherent with the latest global needs.
In order to transfer knowledge to practice, UGJFA will offer its students bachelor, graduate and professional programmes which equip them for the latest demands and challenges in their fields. The academic personnel and students will establish regional, European and global partnership in order to apply their knowledge in practice and improve the quality of life in Kosovo and region.
University was started in the academic year 2013/2014 first three faculties namely as:
The University of Gjakova “Fehmi Agani” is a descendant of the High School that prepared the teachers during the second half of the sixties (1968). The Centre of the Faculty of Education in Gjakova was initially established as a Pedagogical Academy with Gjakova’s Municipal Assembly’s Decree, nr.01-5354/I, date.29 July 1967, and it started its work on 01 October, 1967.
The department Biology-Chemistry was established in 1968, whereas the department of Teaching in Class in 1977. Since 1977, the school operated through 5 departments. In 1967, 794 students were enrolled in the following three departments: Albanian Language and Literature, Mathematics and History-Geography, 247 of who attended the classes full time whereas 547 part-time. Five hundred thirty-three (533) students were attending schooling full time and 536 part-time at the Department of the Biology-Chemistry in 1968 when it was established. Until 30.09.2004, a total of 3940 students taught in Albanian graduated from the High Pedagogical School of Gjakova.
In 2001, the Senate of the University of Prishtina approved the teaching plans in accordance with the Declaration of Bologna for the Bachelor level. After the establishment of the Department of Education, since the academic year 2002/2003 the students enroll in SHLP programmes, initially only in the Department of Class teaching, and afterwards in the others.
On 07.05.2003, with the Decree number 33/01, the Ministry of Education, Science and Technology decided that the Department of Education with its regional centres in Prishtine, Gjakove, Prizren and Gjilan, established with the Administrative Decree of 9th of September 2002, can begin to develop educational programmes for training of lecturers for different subjects of the lower secondary school education for the academic year 2003/2004.
In September 2004, the senate of UP, upon proposals of the Joint Steering Board, approved the teaching programmes for the branch of Gjakova. The Department of Medicine of the University of Prishtina has begun work with the branch departments of Nursery and Midwifery Schools in Gjakova since the academic year 2011/2012. The Department of Mathematical-Natural Sciences of the University of Prishtina has begun work with its Educational Chemistry programme in Gjakova in the academic year 2011/2012. The Department of Philology of the University of Prishtina has begun work with its programmes in Albanian Language and English Language in Gjakova since the academic year 2010/2011.
The University of Gjakova “Fehmi Agani” started operating on 1st of October 2013 with the Department of Education, programmes of Preschool and Elementary School, the Department of Medicine with Nursery and Midwifery programmes and the Department of Philology with the programmes in Albanian Language and English Language, all of which were accredited by Kosovo’s Accreditation Agency on April 2013. 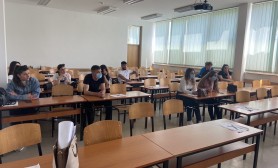 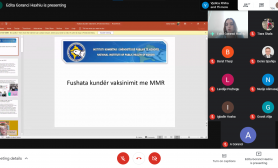 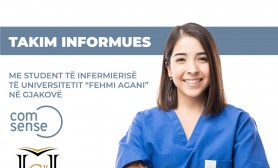